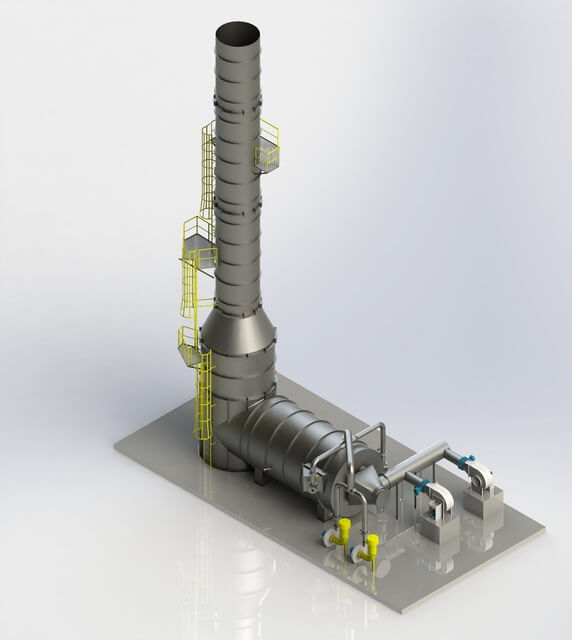 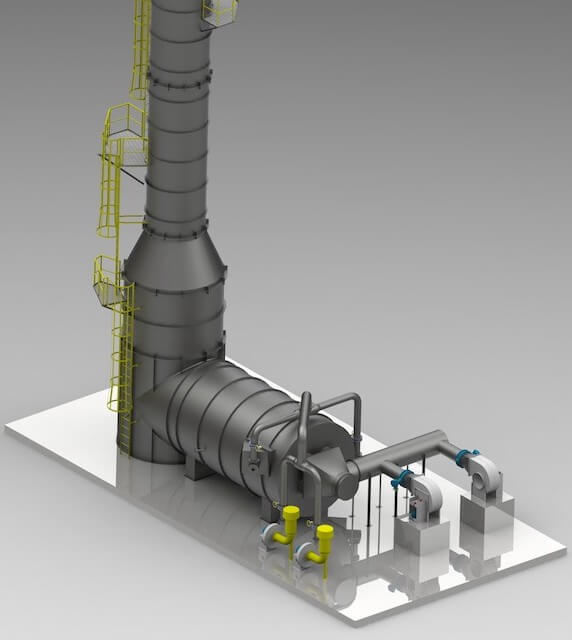 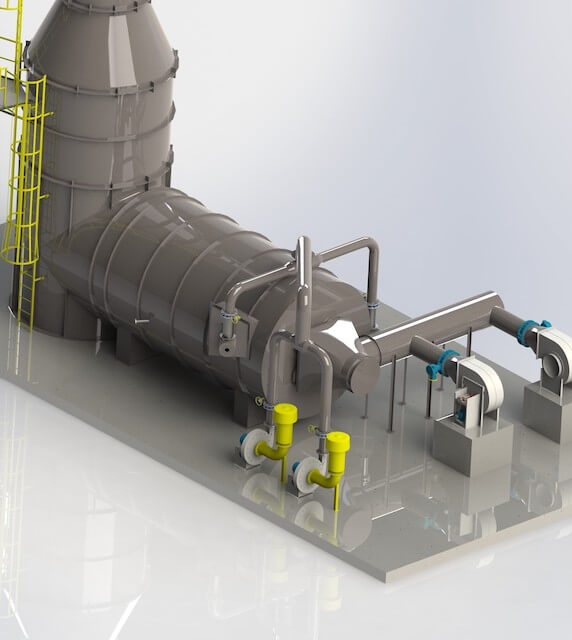 Other Types of Thermal Oxidizers:

What is a thermal oxidizer?

A thermal oxidizer (also known as thermal oxidiser, fume incinerator or thermal incinerator) is a type of air pollution control equipment used in industrial processes to reduce emissions of volatile organic compounds (VOCs), odors, harmful air pollutants (HAPs), and other greenhouse gases (GHG) before releasing them into the atmosphere.

How does a thermal oxidizer work?

Similar to an incinerator, a thermal oxidizer is an EPA-approved device to treat VOCs, odors, HAPs, contaminated gases, and aerosolized solvents.

*A thermal oxidizer may not be effective at removing inorganic odor compounds.

*A Rotary RTO or Three-chamber RTO will be the most effective at removing odor compounds.

*Note: only direct-fired and recuperative oxidizers are effective at treating particulates.

Main components of a Thermal Oxidizer

A thermal oxidizer will typically use a forced-draft fan setup instead of an induced-draft fan system, because the process air temperature is usually cooler on the inlet side. Installing the fan on the coolest side offers the best fan performance due to increased air density at lower temperatures.

The heat-generating system of the thermal oxidizer is comprised of the burner, gas train, and combustion blower. The gas train provides natural gas and the combustion blower provides ambient air with oxygen for combustion. Most burners come equipped with an ultra low NOX controller to tweak the air and fuel mixture to increase flame size and reduce peak flame temperatures, thereby reducing NOX production.

A 3-D CAD rendering of a direct-fired thermal oxidizer (DFTO).

A drawing of a basic thermal recuperative oxidizer (TRO),
with primary heat exchanger mounted on top.

How Much Should It Cost?   Use our Budget Calculator. 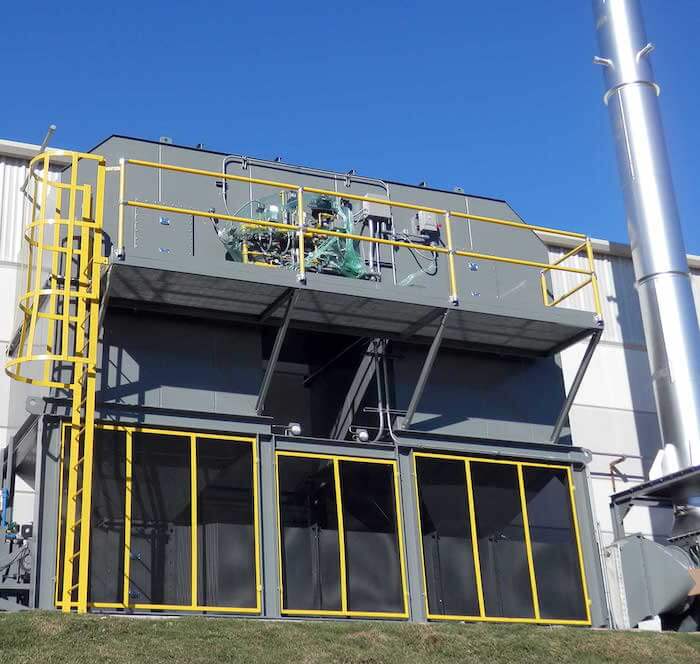 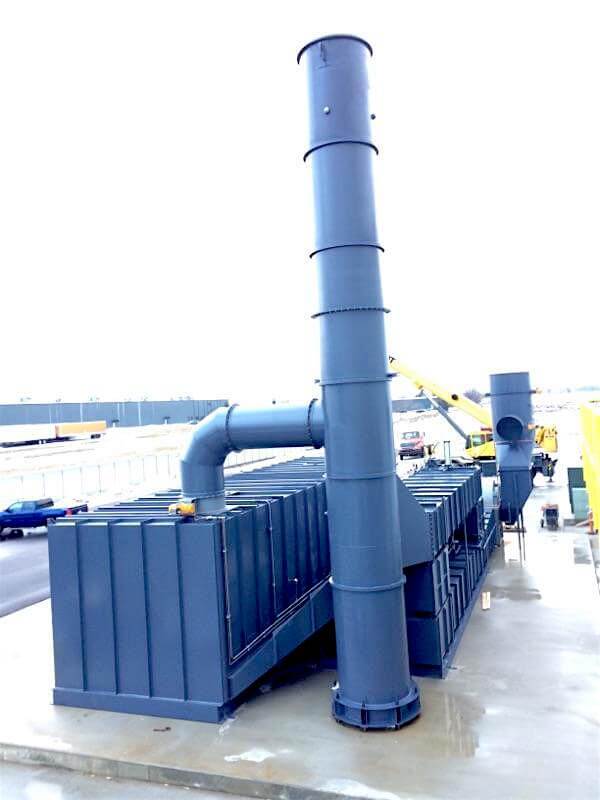 A thermal oxidizer (TO)

The volume of process air to be treated is a key consideration. A single thermal oxidizer (TO) system can be designed to handle any amount from 100 CFM (DFTO) to over 80,000 CFM (RTO). Multiple oxidizers can be combined to treat any volume of air.

Each type of thermal oxidizer has a range of air volume flow rates that it can feasibly handle without getting too large or too small (too costly).

Each type of thermal oxidizer can offer a slightly different destruction or removal efficiency. A one-direction flow unit like a direct-fired thermal oxidizer (DFTO) or thermal recuperative oxidizer (TRO) with simple air-to-air heat exchanger will offer the highest destruction efficiency of 99%. Most 3-chamber RTOs can also offer 99% DRE. A 2-chamber RTO will be limited to 95-98% DRE due to dirty air that escapes during the periodic switching of air flow direction.

Retention time, or residence time, is the length of time that a VOC/organic is at the appropriate oxidation temperature. Typically, if a 95% destruction/removal efficiency (DRE) is required, then a residence time of a half a second is adequate. Meaning if the organic is brought up to a temperature of about 1400°F, and maintained at 1400°F for half a second, then 95% of the VOCs will decompose. Both retention time and residence time refer to time inside the thermal oxidizer's combustion chamber. Sufficient air mixing, also known as turbulence, must also be achieved. If the turbulence occurs and if the 1400°F for a half a second is achieved, with adequate oxygen, then 95% of the volatile organics will be destroyed. In some cases, particularly in the chemical industry, oxygen must be added to a process stream. For each organic, a specific temperature and a specific retention time is required to achieve the desired level of destruction. The table above illustrates these points for several VOCs.

Temperatures and Residence Times to Achieve Target DRE   (in °F)

How to decide which thermal oxidizer is right for your process? 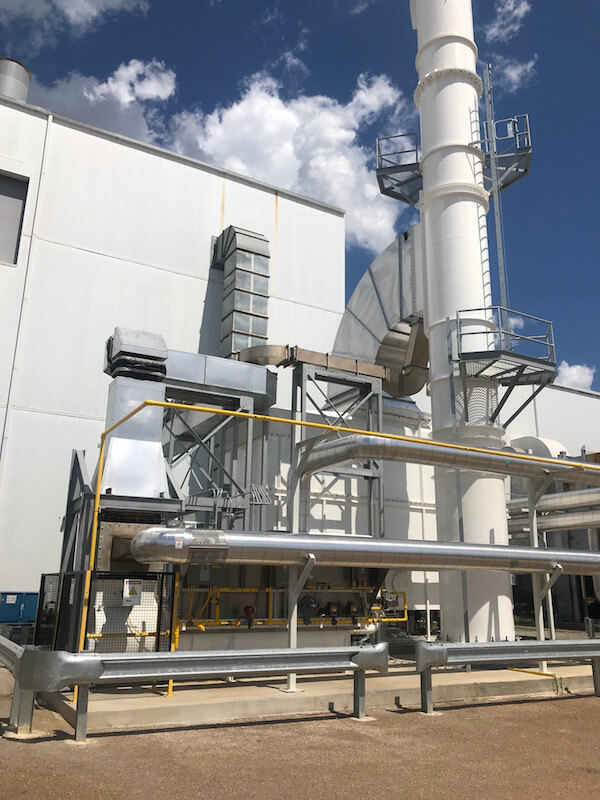 Ultra low NOx burners are required by many customers and are legally required in many areas of California as well as several other states. The key to achieving an ultra-low level of NOx is uniform heating and operating at minimum combustion temperature which is achieved by operating lean (lower fuel-to-air ratio). More NOx is produced at higher flame temperatures. NOx emissions do not form in significant amounts until flame temperatures reach 2800°F. Ultra low NOx burners are expensive and typically cost $10,000 - $30,000 USD depending on size.

A flame arrestor (arrester) is a safety device that stops combustion by extinguishing the open flame. The flame arrestor can be mounted to the inlet of the oxidizer and utilized to prevent flame propagation in the case the high temp limit or 50% of LEL limit is exceeded, or in the case of a thermal event. Cost is typically in the $10,000 - $15,000 USD range based on size.

A digital gas flow meter with by-pass look can be installed on the inlet of the gas train. Cost is typically in the $8,000 - $11,000 USD range based on size.

For sufficiently large thermal oxidizers, the waste heat from the primary heat exchanger (~500°F) may be used to heat process air or liquids. For example, TO waste heat can be used to heat drying ovens, generate hot water, heat the plant in the winter, or many other industrial applications.

Do You Need A Budget Cost?   Use our Budget Calculator.

Other Types of Thermal Oxidizers 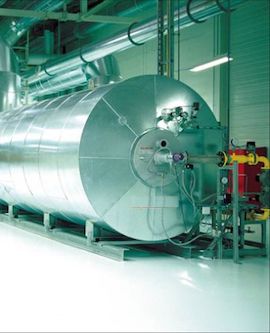 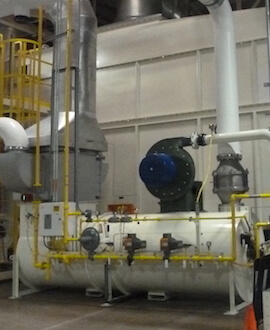 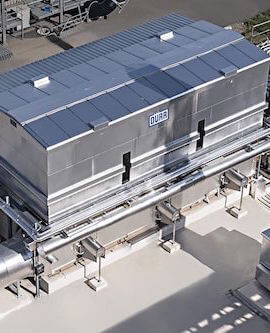 What is a thermal oxidizer?
A thermal oxidizer, also known as a TO, TOx, ThermOx, or thermal incinerator, is a type of VOC abatement or air pollution control equipment. It's primary use is to decompose or destroy the exhaust/waste gases from an industrial process, so they are safe to release into the atmosphere.
How does a thermal oxidizer work?
A thermal oxidizer breaks down airborne VOCs into CO2 and water using a natural gas fired burner to heat up an air stream to oxidation temperatures, approximately 1500°F. Each TO uses a fan to push or pull the industrial exhaust gases into the oxidation chamber for approximately 1 second, completing the oxidation reaction. Then it will release the safe carbon dioxide and water by-products into the atmosphere via a stack.
How much does a thermal oxidizer cost?
A new direct-fired thermal oxidizer (DFTO) will cost $90,000 to $300,000 USD depending on the size. The smallest units, 100-500 cfm, will cost $90k-$100k; while a larger TO unit, say 10,000 cfm, will cost closer to $300k USD.

A new regenerative thermal oxidizer (RTO) is even more expensive, due to the extensive ceramic media heat exchange system. The smallest RTOs will cost $250,000 USD and the largest single units cost over $1 million.
How long will a thermal oxidizer last?
This depends on a few factors: how corrosive the incoming process gases are, amount of abrasive particulate, installation location, operating hours, operating temperature, and shutdown/start-up cycles. In ideal conditions, a thermal oxidizer should last up to 20 years. If your TO handles corrosive gases, abrasive particulate, sits outside in a hot climate near the ocean, or operates at a high temperature, for many hours, and/or has many on/off cycles, then this will reduce the usable life down to 10 years. So anywhere from 10-20 years depending on conditions.
What is the difference between a thermal oxidizer and a flare?
Thermal Oxidizer vs Flare: The difference between a flare and a thermal oxidizer is based on how they're meant to operate. A flare is designed for continuous, high concentration VOCs, where it can run in steady-state without any supplemental natural gas. A thermal oxidizer (TO) is designed to operate with some amount of supplemental natural gas, either for low concentration or non-continuous applications. Also, a flare can be open or enclosed, where a TO must be enclosed to maintain temperature.
What is oxidation temperature?
It's the temperature where VOCs will complete their oxidation reaction in a specified amount of time, typically 0.5-1.0 seconds. This temperature varies for each species of VOC. The set point or operating temperature for a thermal oxidizer is typically set at a high enough point to fully oxidize all VOC species, given the TO's design residence time. A long residence time allows for a lower oxidation temperature, and vice versa.
How to size a thermal oxidizer?
A thermal oxidizer is sized based on three key factors: Using those three considerations, a TO manufacturer can size your oxidizer unit properly.
How to select fan for a thermal oxidizer system?
Selecting a fan for any pollution control system, includes three considerations: Using those three considerations, a TO manufacturer can select the correct fan for your application. 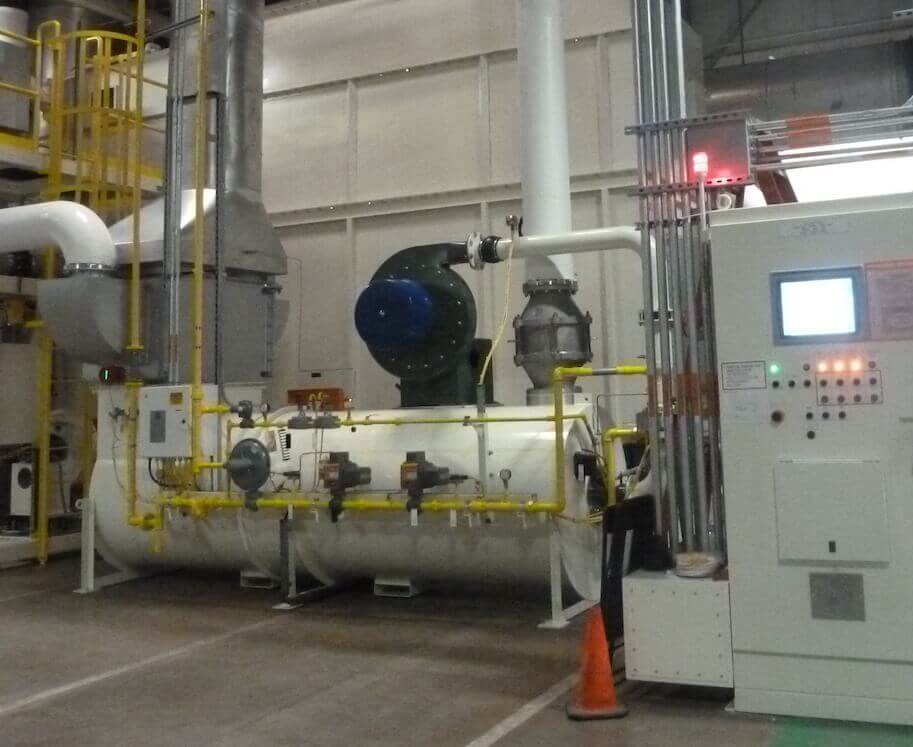 A photo of a thermal recuperative oxidizer (TRO) in an industrial penthouse.

How Much Should It Cost?   Use our Budget Calculator.